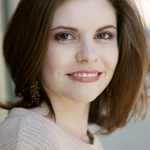 Cincinnati native soprano, Hannah Meloy, is an emerging artist and voice teacher in the Boston community. Hannah obtained her Master of Music degree from the Longy School of Music of Bard College in Cambridge where she began her studies with her current teacher, Carol Mastrodomenico. During her tenure at Longy she was a winner of the 2016 Longy Honors Competition. With an affinity for interpreting and performing art song, she was selected to participate in the 2016 Cleveland Art Song Festival where she worked with Susan Graham, Bradley Moore, Eduardo Valdes and Edwin Crossley-Mercer. In the 2018 she won 3rd prize in the Philharmonic Society of Arlington's Young Artist Concerto Competition for her performance of Samuel Barber's Knoxville: Summer of 1915. She was one of four singers chosen to attend the Stratton Mountain Vocal Workshop at the 2018 Manchester Music Festival where she coached with Warren Jones and Sidney Outlaw and shared the stage with Warren Jones and Renee Tatum. Such experience with world renowned musicians has given her excellent insight into developing her own teaching technique and style.

Her operatic roles include most recently, Zerlina in Don Giovanni; Valencienne in The Merry Widow; Miss Paige in Dan Shore’s An Embarrassing Position; scene work as Sophie in Werther, Norina in Don Pasquale, and Gretel in Hänsel und Gretel; Despina in Così fan tutte; Susanna in Le Nozze di Figaro; Pamina in Die Zauberflöte; and Foreign Woman in The Consul. She has performed with the Jacksonville Symphony Orchestra, the Beiras Philharmonic Orchestra in Portugal as well as with the North Czech Philharmonic Orchestra.