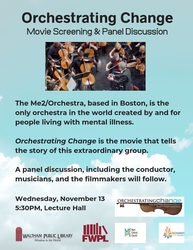 Orchestrating Change is a documentary about the only music organization in the world created by and for people living with mental illness. Me2/Orchestra was started in Burlington, VT in 2011 and a second orchestra was formed in Boston in 2014 where the organization is now headquartered. Half the musicians have a diagnosis of mental illness and half do not. The 93 minute film will be shown first, followed by a panel discussion with the conductor, musicians, and the filmmakers. Wednesday, November 13, 5:30 pm at the Waltham Public Library, 735 Main Street, Waltham, MA