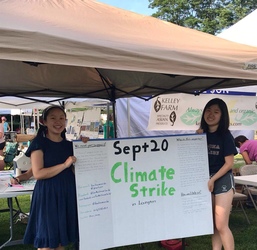 My name is Grace Yang. I’m 14 years old and the co-organizer of the Lexington Climate Strike.

Climate change is rightly called the biggest issue of our time. When my generation grows up, we will face a disaster like never before with heat waves, floods, droughts, food shortages, and much more.

On September 20th, kids and adults all around the world will walk out of school and work to protest for climate action. Lex Climate Strike is part of this international movement, so we’re going to be showing the government we want a future.

People keep saying that activism never changes anything. This isn’t true—How did women get the right to vote? By protesting. Climate activism has already made a difference —The European Investment Bank, the world's largest public lender, published a new draft policy that would stop funding fossil fuels after 2020. They said themselves that climate activism was part of their decision.

Governments and corporations have been careless and my generation shouldn’t have to pay the price. Thanks for helping us fight for climate action, which affects us the most.

RSVP and more information is at http://bit.ly/LexStrikeRSVP.
Like our Facebook page at https://www.facebook.com/LexMaClimateStrike/
We need all the support we can get!

Will you fight for us? Will you show the world you want a future for my generation?